Our goal is to bring Hyper-V feature set on par with that of the VMware. One feature that is not yet available for Hyper-V is Screenshot Verification. If you’re not familiar with this feature, it provides an automated way to near-instantly verify VM backups. After a VM backup is completed, the product can instantly recover the VM, wait until the OS has booted, make a screenshot of the OS, discard the test-recovered VM, and send you a report with the screenshot via email. And then, in the options screen, I’m going to set up screenshot verification and I’ll use one of the hosts, like this one. We don’t need any delay, so basically, this option is more or less the same as in VMware. Job is created, I’m going to run it. So basically, it will back it up and then do a flash boot, and then a screenshot is created out of the VM. So this feature is still in progress, we only have screenshot verification for backups, replicas will be done not sure when, probably next week, maybe after that.

Ok, so here we have a screenshot of the last run, so basically, as you can see here is the time stamp. This is some windows VM and it shows some screen saver with current data and time. The same goes for reporting, so the report will show the screenshots, I guess that’s it.

And one more note, this VM is located on Hyper-V 2016 and for 2012 the API is a little bit different and it can only show small thumbnails, so as you can see here, a picture is pretty big, for 2012 it’s half the size or even less probably. 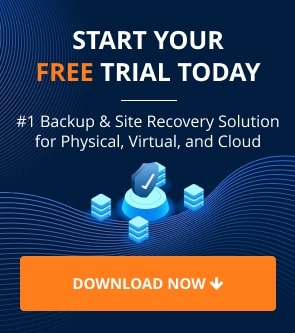